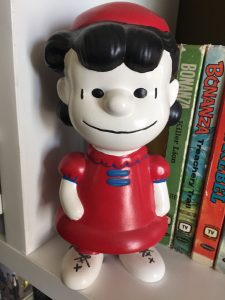 A long time ago, Rich and I were flying so where or other, and we were the window and middle seats in our row. Shortly before the plan left the gate Mr. Aisle Seat took his place.

He put his jacket in the overhead compartment, sat down, pushed his seat back, and promptly went to sleep. We didn’t hear anything from for the entirety of the flight.

After we landed and taxied toward the airport, and as we came to a rest at the gate, he stood, opened the overhead bin, and grabbed his jacket.

One of the flight attendants quickly jumped up and scolded him to return to his seat because the captain hadn’t turned off the fasten seat belt sign.

Sure enough. There it was, the fasten seat belt sign was still on.

The man gave her a smoldering look (you know the kind…meant to set your hair on fire), and started to sit back down. No sooner than his butt hit the seat, the fasten seat belt sign dimmed out. He stood back up and gave the flight attendant a healthy glare, then put his coat on. As he did, he turned to us and tilted his head in the direction of the flight attendant.

It’s funny how the words of a total stranger, a man we’d never met before and never saw again, will stick with you.

To this day when we encounter a petty tyrant, we laugh and say, “Give a little person a little power.”

It’s easy to spot one during the ins and outs of daily life, that little person who needs power to feel big and important.

The doofus behind the counter who tells a kid to throw out the last bite of the candy bar because carry in snacks aren’t allowed in the movie.

The gatekeeper who makes sure no one is allowed inside the building until precisely 5:45, so everyone can just stand outside in the rain and wait, thankyouverymuch.

The person who deliberately pulls out in front of you just so s/he can proceed to drive at a snail’s pace to make a point.

It’s harder when we are the little people with a little power. And at times, we’re all little people, and very often there are even littler people around us that we impose our will on.

We get to be Lucy pulling that football out of Charlie Brown’s path.

But is that the best choice?

Do we really need to correct the toddler who is trying to pick up her toys? Is it important that she puts them away “the right way.” Won’t they all get pulled back out and strewn across the floor tomorrow? And really — on a day-in-day-out basis…how important is it to have a picture perfect desk? Do you actually live on Pinterest??

I am a parent with my own OCD neatnic tendencies. Unfortunately, I know all too well how hard it is to watch the someone put the dishes in the dishwasher “the wrong way”!

But is it important? Really? Or am I better off encouraging any positive help I receive from the peanut gallery?

I often remind myself: “Don’t let the little person be you!”