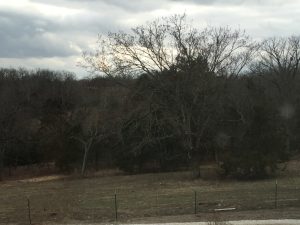 What is it about February?

In January, I’m all “hey, it’s a new year, isn’t it great!” but then when I turn the page on the calendar from January up to February, it’s like my world shifts a little off kilter.

February, a month known to strike fear in the hearts of many a soul. And I always feel better knowing I’m not alone in this, because I’m not (and you’re not either).

Ask around. Ask other parents. Ask the people you do business with.

It seems like no one is totally immune. When I talk to other parents, they say February is “the month” that drives them (and their kids) around the bend. It’s only 28 days long (okay, some years it’s 29), but it seems like this little month it take FOR EVER.

We’re sunshine lovers at our house, so when the skies turn gray for a few days (just look at that picture! that’s what’s going on outside!), our moods do likewise. Maybe we’ve just reached our seasonal maximum of gloomy, snowy, cold, windy, and generally disagreeable weather. But when the weather takes our sunshine away for a few days, and we start looking for any excuse for a little joy and happiness.

We can be together happily all fall, and then around this time of year it’s all snark and grump.

I have a friend who tells a story about her daughter who was 16 or 17 at the time. The girl wanted to save money so she could graduate homeschool high school early and start college. She put out a jar in the house for people to donate money — and because it was February, the mom said she sometimes found herself putting money in the jar, too.

There’s just something about February.

Right now, we’re already more than week into February, and I’m asking myself, “WHAT WERE YOU THINKING???” Simple answer: I wasn’t. I was just cruising along hoping this February would be different. But it’s not.

So I concentrate my thoughts on what’s good about February. The coldest days of winter are behind me — and sometimes before the end of the month the earliest crocus pop their heads up. It’s got Valentine’s Day, which means a sale on chocolate on February 15th. It’s a great time to plan for the perfect garden. And best of all, even in a leap year, it’s still the shortest month of the year…and at the end of it all, is March!

March, March, March (nothing like a month that’s also an imperative!)!!

If I hold on just a few days longer, March will arrive.

March is terrific! The days will be noticeably longer and warm. Spring will really and truly be here with tulips, hyacinth, and daffodils springing up in the yard. The lawn and garden center will have pansies on sale.

Instead of staying cooped up inside, we can be out digging in the dirt, planting flowers, and dreaming about all the possibilities for summer.

Until then, I carry on…counting down the days.