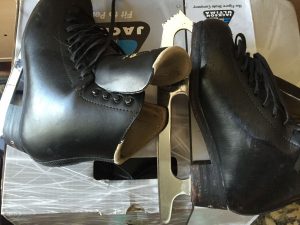 For some people it’s the holidays. For others it’s October and one too many fall festivals. For us, time marches on…to March, the month that goes kablooey.

See, here’s the deal: my son ice skates, which means, for our family, March is The. Ice. Show.

For going on 60 years now, our local ice rink puts on an amazing ice show every year (it’s the longest continuously running ice show in Missouri), and a couple of weeks later, we host an ice skating competition. It’s two big events, one right after another — so there’s extra rehearsals, extra practice time on the ice, visits from out of town relatives, and …well, kablooey!

The first year Wyatt participated, we didn’t know what we were getting into, but “it’ll be fun.” And, indeed it was fun…but March was a train wreck.

The next year, I thought the first year was an anomaly and the second time around it would be better.

By the third time at the rodeo, rather that fight against it, I realized we needed to plan for March hitching a ride on the crazy train. It was the new normal. We know that beyond this point in the calendar there be dragons…and we plan accordingly.

The week after the ice show (when we are tired) we take the week off from school. Aah, the joys of homeschooling!

Because the ice competition is two weeks after the show, we keep all the other weekends in March free of commitments.

The freezer and pantry are both stocked with the ingredients for quick meals and snacks (tuna tetrazinni, spaghetti, chili & cinnamon rolls), and I’m made peace with the fact that sometimes we may just hit the drive-thru and bring home a pizza. It’s hot (mostly), and it keeps us from starving.

It doesn’t matter if it’s a family event like this one or a business event (like planning a conference or dealing with a major project), plan ahead. Especially plan ahead to practicing a little self-empathy.

We’re just a little human family — and being nice to ourselves helps make the chaos more manageable.