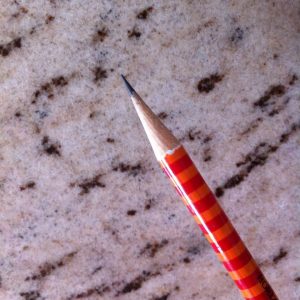 I love back to school time of year. There’s just something about a the fresh boxes of pens, pencils, and paper, the big bins filled with folders decorated with cute kittens and puppies, stacks of spiral notes, and brand new erasers in all sorts of fun shapes.

But it’s more than just “new stuff” that makes me happy, it’s what it represents. A fresh start, unlimited potential, new opportunities for growth and learning.

It’s like the whole year is that spiral notebook. It’s totally empty, and we can create whatever kind of fresh, exciting story we want to fill its pages.

It’s all out there.

So I’m taking a few moments to inhale the smell of just sharpened pencils and touch their pointy tips. I’m shopping during the week…when everyone else is at work and the aisles at Staples and Target aren’t full.I’m not fretting about what lies ahead.

I’m content to show myself a little grace and mercy, enjoying the mid-year new year.

When I was working at Presbyterian College, speakers regularly visited the campus on Tuesday morning, talking about this that or the other thing.

During one of those Tuesday morning sessions, the sociologist and evangelist Tony Campolo was the speaker de jour. At one point in his presentation, Campolo told a story about a prostitute and people who “didn’t give a shit” about her situation.

Then he waited the requisite beat before continuing to say what really bothered him was people who were more concerned with the fact he’d just said “shit” than the actual problem he’d been talking about.

I often come back to that idea when I’m teaching literature.

A few years ago I taught To Kill a Mockingbird, and the mother of one of my students was really upset and called to talk to me about the book.

She was upset because, during the trial Tom Robinson testifies to what Bob Ewell said to Mayella Ewell, his daughter: “You goddamn whore, I’ll kill you.”

THAT was the issue — the use of the words “goddamn” and “whore.”

Never mind the situation Mayella is in. Never mind Tom Robinson is accused of something he did not do. No. Those weren’t the issues, but these were?

Did I really need to repeat that kind of language in class? (Well, yes, considering that’s exactly what Harper Lee wrote.)

Was it appropriate? (Well, no, it’s never appropriate for a father to look at his daughter and call her a goddamn whore.)

Had I ever considered using WhiteOut over that section and the other swear words in the book. (No. And just for the record, I’ve never considered taking a big old bucket of paint and putting clothes on the figures on the ceiling of the Sistine Chapel, either.)

When I teach To Kill a Mockingbird I honor what Harper Lee wrote by reading her words. I do the same when I teach Merchant of Venice or Huckleberry Finn. It’s not easy. It’s not comfortable…and I think that’s the point. 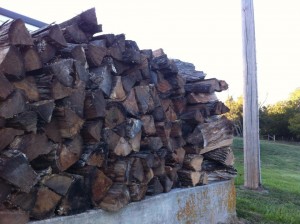 It was a cold snowy weekend, this last weekend in February. The snow came down steadily beginning around noon on Saturday and continuing through the night. When we woke on Sunday morning, there was a nice six inches on the ground. Snow like that always leave me digging out Jack London’s “To Build a Fire.”

I grew up in a home with a wood burning furnace in the basement. During the heart of winter upon coming home from school, it was my job to stoke the coals and toss in a few logs to bring the fire back to life. And because my bedroom was in the northwest corner of the house, I was highly motivated to keep the warm and toasty air flowing from the furnace registers and hold the chill winds at bay.

Today, I live in a home with an outdoor wood burning furnace, so I’m still more concerned than most people probably are with the nuts and bolts of building and sustaining a fire. Stir up the ash so those coals at the bottom find a breath of fresh air. Start with a few smaller logs, but don’t add too much fuel too fast or the fire may be smothered out.

Each winter when the temperatures plummet and the wind cuts to the bone, “To Build a Fire” reminds me that Mother Nature is not your friend. A friend doesn’t freeze the hairs in your nose as soon as you walk outside and take a breath.

Reading this story reminds me of the time I decided to walk home during a ground blizzard in Laramie. Rich and I lived on the very north edge of town, and because of the snow, I’d caught a ride to the university instead of driving myself (Laramie in winter…ya gotta love it.).

With the wind whipping off the mountains, it was well below zero and absolutely bitter. Walking home, the trek got longer and longer. I was dressed for the weather, but the weather had the advantage. By the time I got home, I understood why people go to sleep in snowstorms and don’t wake. I also knew if I’d had to light a fire, it would have taken more than one match.

And that’s why I always want to yell at the guy in the story. “You stupid idiot! Don’t walk out on the ice!! D’oh! You just used all the matches!!! You don’t have a Menards you can drop past on the way home from work!!”

It’s been snowy again today and the wood is damp. I’d better go check the furnace. Wouldn’t want the fire to go out.

If you enjoy my newsletter or follow #ThisDaysJoy on Facebook, please consider supporting my work on Patreon. Donate as little as $3 per month, for patron-exclusive posts and content!